It’s been a hot minute since we heard from them, but on the 28th, the newest blog from Christian Dailey finally went live, and the fans rejoiced.

As per our last post, we’re going to be trying to stay away from speculation and focusing on what we do know for sure, and to focus on the positive things that we’re seeing from the team. As with anything they release, changes are likely, but overall we’re seeing some good stuff.

This month’s blog brings in to focus, in Christian’s words, “the ideas being tested with Javelin gameplay, builds, and skills trees.” Feedback has been taken on from players of the game, mixed up with the creativity of the team working on it, and they’ve got some interesting things to show us. There’s a lot to condense, so I’m just gonna let the images speak for themselves and provide some general commentary.

The first thing to note is the element of choice that they’re trying to work into the gameplay, with 11 available slots for equipment, the ability to change both equipment and abilities in a single loadout screen, and the complete removal of components and introduction of what they’re referring to as Mods and Artifacts.

From the screenshot below we can hone in on two apparent mods: “Sturdy Power Core”, and “Power Core”. There also appears to be a Heavy Axe ability and let me tell you, several members of our team are very excited about that in particular. There is also the “Skyfell Launcher” - more on that later.

Abilities will become something you unlock through gameplay - no more waiting for that component that you desperately need to complete your build to drop (I’m looking at you, Tip of the Spear). Mods will empower abilities - seems straightforward enough - and perhaps most importantly, synergies between pieces are going to be how builds are defined. How one piece of equipment works with another depending on the mods you have attached. There appears to be several different mod slots in this possible system as shown below - as well as a secondary option for Flame Axe ability.

You’ll also be pleased to note that they have said inscriptions will no longer be the defining characteristic of a build. Those of us who spent time grinding for those perfect double rolls will know the pain of this, so the fact that they’re looking to improve it is a welcome piece of news

Bioware also appear to be going back to their roots with Skill-trees. We know from previous communications in months past that skill trees were an original concept that got drafted out, so it’s exciting to see them make a comeback. Time will tell what these skills are, and how the progression through them works, but from the above image it would appear that there is a good bit of customization available.

These are strictly a test concept at the moment, in Christian’s own words, but would allow for the option of an Advanced Skill tree, Note that in the above image there are three specialisations for Ranger: Captain, Longbow and Soldier. We’ve had a sneaky peek at what the advanced skill tree may look like, too.

So far, every image has laser-focused on the Ranger, so we can only speculate as to what might be in store for the other classes. With the concept of this build though, we’ve been told that every Javelin type will have access to multiple specialisations, each will have their own powerful Artifact, and that several types of gameplay will be catered to.

Speaking of the “powerful Artifact”...

Each Javelin would have it’s own artifact, unique to the class, that can be upgraded, changed, and perhaps the biggest change of all, the introduction of passive abilities depending on what you have equipped onto it.

That’s all for now, Freelancers. Stay tuned for the next update! Strong alone, stronger together. 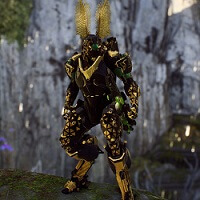 Nutmeg
Ranger enthusiast, pretends she doesn't care about the leaderboards. Actually here for the pretty noises the loot makes.
Twitter