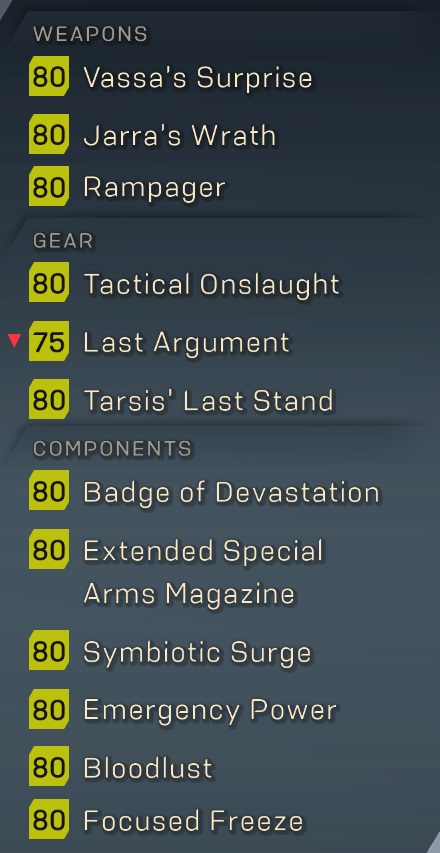 The entire purpose of this build is to do absolutely ridiculous (and generally unnecessary) amounts of ultimate damage. We’re talking well over 1 million per rocket if you have decent rolls. This is absolutely not the most effective or useful build, but it’s a ton of fun. If you want to see the most possible damage you can do in 2 seconds, this is your build. For a more realistic ultimate build, check out the Balanced Ultimate Ranger Build by Nutmeg

The last three components are going to be whatever you can get with the most ultimate damage, but i will list the ideal options, if you end up in a situation where you have to choose. They will not match my posted build, but that's only because I have double ultimate rolls on everything else.

As previously stated, this is NOT a build you want to take out regularly. You will struggle at times, and often feel useless between ultimates. Fortunately, “between ultimates” is only like 15 seconds if you have a good target for Vassa’s Surprise or a cluster for Last Argument. Being able to wipe out any non-boss enemy with ease makes the minor struggles well worth it. If you want a more effective and balanced Ultimate focused Ranger, I suggest the Balanced Ultimate Ranger Build instead. The ultimate damage in this build is entirely unnecessary for anything other than showing off, and you will do much better overall if you sacrifice a bit of ultimate damage for better combos.

If you’re looking to test out what the absolute highest ultimate damage you can achieve is, you will need some help.

First, The Temple of Scar is the place to go. Scelos is by far the best option for hitting huge numbers, because of his easy to target weak points on his legs, and the fact that he is the only boss that is armored (yellow health bar). This means that he takes more damage when Acid primed than any of the others. You can use Scar Enforcers as well, but they have so little health that you may kill them before you hit the weak point.

In order to hit the absolute maximum possible, you will need a full squad dedicated to helping you do it. Two other Rangers and either an Interceptor or Colossus for Slayer’s Furor/Berserkers Cry. You and the other Rangers can stack Tarsis’ Last Stand 3 bubbles deep and you will get a buff from each of them.

Swap out Badge of Devastation for another Universal Component with more Ultimate damage when you enter the boss room. This will make recharging your Ultimate much more difficult, so don’t mess up your first try. You will also have to maintain Rampager at 5 stacks, and make sure you activate Symbiotic Surge right before you use your Ultimate. When targeting the missiles, always try to lock on to a single leg, to make sure that they all hit the weak point and don't hit his body or other legs that still have the armor plating.

Now sit back and watch the fireworks!