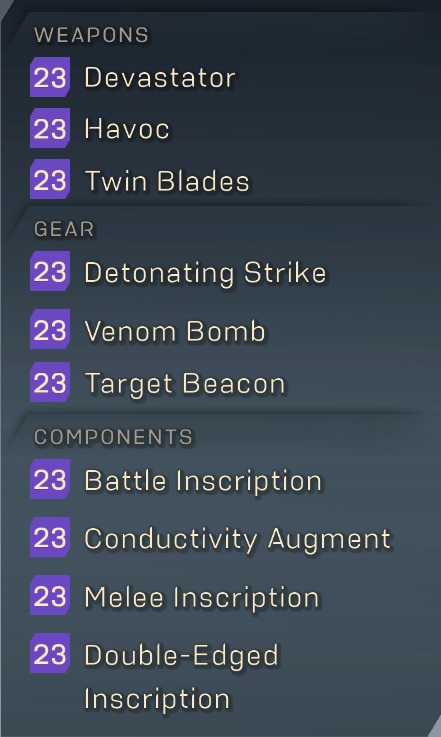 This is my personal suggestion for an Interceptor set-up while playing through the main story and leveling up to pilot level 30. Early game there is quite a lot of freedom to play however you want as guns are quite effective and most gear is as well (this is not the case in the end game). Feel free to change things out or just do whatever feels good to you personally.

As you level up you will unlock more component slots, maxing out at 6 slots at level 23. Use this list as a guide for the ideal components to use as you unlock more slots. Keep in mind that your Javelin’s shields and armor come from your components, which are based on the item level. You may have to switch out a prefered component for something less ideal if you outlevel it too far and can’t get a higher level version.

This build is designed mostly to take advantage of melee and combo damage, with a little support from guns. Don’t rely too heavily on guns, that’s something you won’t be able to do at all if you make it to Grandmaster 3. Don’t forget to throw your Target Beacon on big targets and always keep acid up. Get into the habit of combos early and things will be a walk in the park. Take a look at our Advanced Interceptor Guide if you want to learn some extra tricks to move faster and deal with certain situations that can be difficult (like Valkyries). Once you get up to or near level 30, check out the Interceptor Guide for a great breakdown of all the Masterwork gear that you will start to find from level 25 on.