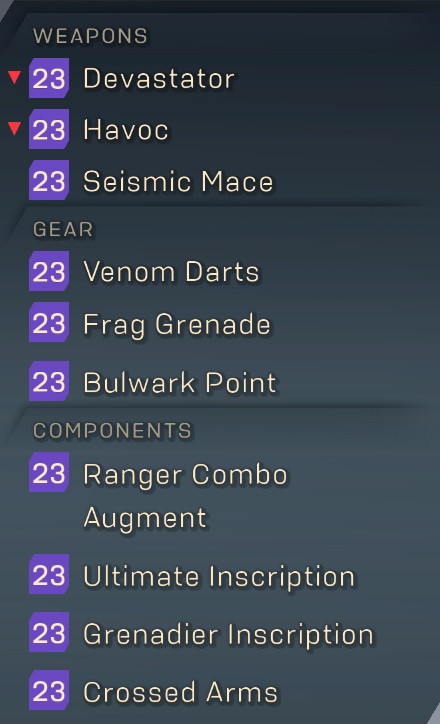 This is my personal suggestion for a Ranger set-up while playing through the main story and leveling up to pilot level 30. Early game there is quite a lot of freedom to play however you want as guns are quite effective and most gear is as well (this is not the case in the end game). Feel free to change things out or just do whatever feels good to you personally.

As you level up you will unlock more component slots, maxing out at 6 slots at level 23. Use this list as a guide for the ideal components to use as you unlock more slots. Keep in mind that your Javelin’s shields and armor come from your components, which are based on the item level. You may have to switch out a preferred component for something less ideal if you outlevel it too far and can’t get a higher level version.

This build is designed to easily clear small enemies with your guns, melee or frag grenade while giving you very strong acid combos for larger targets and your ultimate for anything that survives that. Try to get used to keeping acid on any larger enemies and comboing as much as possible. Combos will also help fill your ultimate meter much faster. If you find yourself wanting to combo even more, swap out Frag Grenade for Inferno Grenade to give yourself a fire primer. This will limit you to only your melee weapon for detonation though, which can work fine as long as you're careful not to get slapped by something bigger than you. Check out our Advanced Ranger Guide for tips on movement and combat. Once you get up to or near level 30, check out the Ranger Guide for a great breakdown of all the Masterwork gear that you will start to find from level 25 on.