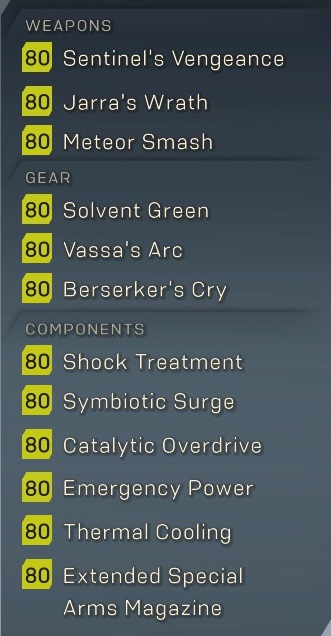 The Blitz build is all about fast paced, explosive Colossus action. It shares many of its core components with the advanced builds by the amazing [JRSVengeance] and [icebaby32], but the focus is a bit different here. We neither prioritize maximal ultimate damage, nor specialize in cunning combo cycles. The goal is to build a well balanced, somewhat agile chonker that packs some nice instant-BOOM, without relying much on rare top items. Thus, it offers a viable alternative to the Venom Storm based Starter Build.

Weapons offer inscription slots that are valuable for your survivability. Ideally, your three weapons will provide a balanced mix of Armor, Repair (or Resupply) Drop Rate and some damage inscriptions. High local damage rolls or other specialized inscriptions are not required.

It is really not hard to guess the gear of this build from the title. But let's have a closer look at the inscriptions and tactics involved.

We are going to use two colossus specific and two universal components to establish a solid basis for our overall damage output. The last two components are very convenient to have, but can be replaced if you need your strongest other components. The Blitz hybrid should have a well balanced combination of Drop Rates, Ultimate and Combo Dmg. Gear Recharge and Armor are ideally already covered by your weapons, and can be balanced with inscriptions on universal components otherwise.

If you want some extra BOOM from sigils, +30% Combo Dmg and +50% Ulti Dmg is solid choice. And in case you replaced Thermal Cooling with something else, a Heat Capacity Sigil may come in handy.

As outlined and linked in the overview at the top, this build is very similar to two of the most powerful Colossus builds. This guide here has not reinvented the wheel, and we won`t even try to go into the technical details and personal tactics that are already wonderfully described in those original guides. Rather, the intention here was to lower the barrier and close the gap between intermediate and advanced builds, since a hybrid approach ultimately can be anything in between. 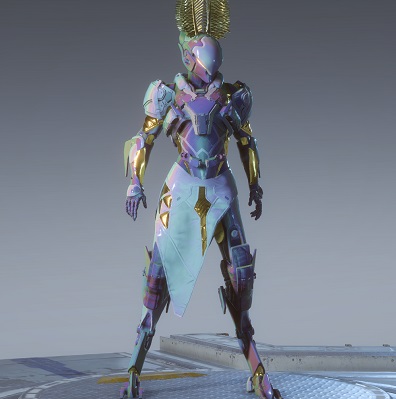 DrBonifarz
Boni is a physicist, techie and casual player who likes to reverse engineer game rules.