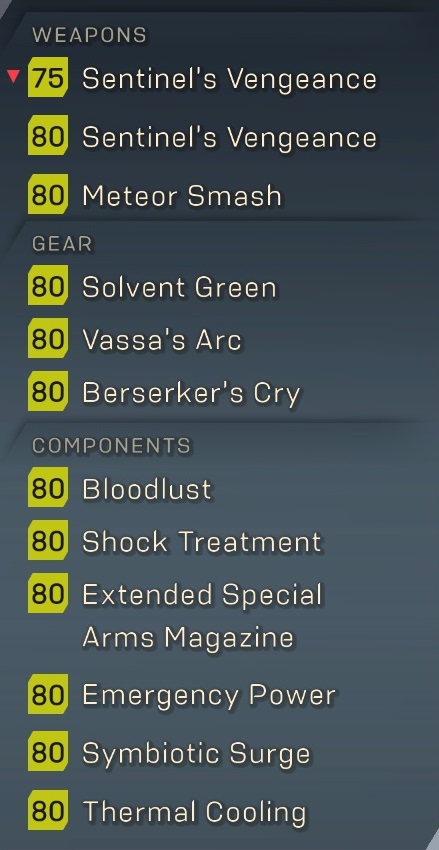 If seeing really big numbers is your thing, there is nothing that can compare to a Colossus geared for ultimate damage. This particular build is highlighted around pushing max ult damage, while still retaining survivability and not being completely worthless in a team setting. Components are selected for their ability to increase ult damage, while guns and gear are focused on using combos to generate ult charges, so you can launch those sweet sweet missiles that much sooner.

This is one way to build a ultimate Colossus, but it is certainly not the only way. It’s also not going to be the most effective build for Colossus in general. A hybrid option that had higher combo blast damage in exchange for trading off some of the ult damage would be more effective at clearing things faster, but this isn’t that build.  This is for hitting stupid big numbers, and because Colossus ult can hit weak points, those numbers can get really big. This is also as close to perfect as I get this build. Every component serves a function, both in terms of inscriptions and base effect. Since you’re not using your shield in a defensive manner with Colossus, you don’t really need Softened Blows, since the perk will rarely if ever proc. And we’re not using a shotgun, so we don’t need Acid Slugs. Or any of the other gun related components. Perhaps Rejuvenating Ammo could replace Bloodlust or Thermal Cooling, if dying was a problem, but I have not found that to be the case with this build. You might, so keep it in mind if you try it out.

The toughest part about playing Colossus in general is that everything happens so slow. Compared to every other javelin, you’re going to be the tortoise. After all, tanks don’t win Formula One races. This build also doesn’t have a way to offset the fire prime from Meteor Smash, so if something doesn’t die to the fire and acid combos, then you have to wait for the acid effect to wear off, as the fire from Meteor Smash will usually remain longer. Until the reset, your best source of damage will usually be a shield bash, which leaves you vulnerable through a reasonably long animation. Some of this can be mitigated by learning all the advanced colossus mechanics in our guide here.

But the upside is that you’ll be able to one shot enemies that no one else can. Legendary Enforcer walking around?  Hit him in the tank, and he’s down. 2 Legendary Enforcers hanging out with a Legendary Escari- well, that’s why you have 3 rockets.  Just try to get the Escari leg exposed first. And your damage is not confined to what you shoot- it spreads in an AoE. So you can clear large groups very fast. You also have enough combo damage to handle the majority of enemies that you’re going to encounter, and if you need more damage, then that’s what you’re been building your ult for.

I typically run this build with an Epic Combo Sigil and an Epic and a Rare Ultimate Sigil. The extra 10% from an Uncommon Ultimate Sigil is not worth losing out on the 30% combo damage. Unless I’m chasing the highest number I can hit.  The 2 ult sigils are probably overkill for this build, but this whole build is overkill. Running a second combo could work, but I’m not chasing big combo numbers.  If I had less armor, I would consider running an armor sigil in place of the 2nd ult sigil.

Voltaic Dome or Venom Storm instead of Vassa’s Arc

Running Voltaic Dome instead of Vassa’s Arc solves the problem of not having a way to offset the fire effect from Meteor Smash, which keeps you from being able to prime with fire again until the fire effect wears off. This turns the build into a significantly shorter range build, as the only detonator you have at that point would be your shield bash    But you could set something on fire with Meteor Smash, detonate the combo, use Voltaic to quickly freeze it,at which point the fire from Meteor Smash immediately removes the freeze effect and primes with fire again. I just don’t like only having the shield bask as a detonator. YMMV. Checkout the Voltaic Dome Colossus build for more in-depth info on running Voltaic Dome. Swapping Vassa’s Arc for Venom Storm gives you a more long-range type of damage along with doing more non-combo damage, but the animation locks you in place. As a PC player there is currently no way to unlock yourself from the animation without using your support ability, which has it’s own animation, not saving you a whole lot of time. I prefer Vassa’s because it allows me to remain mobile and detonate while doing other things.