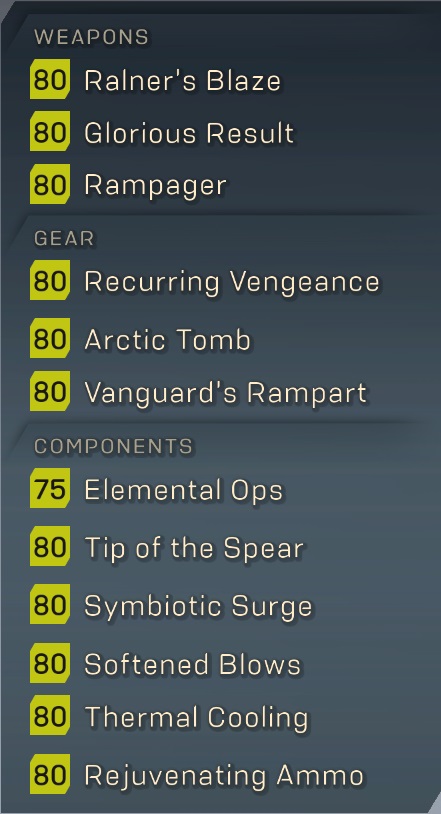 Combo Ranger is one of the best builds for when you have to deal with a lot of high health mobs. Ranger combos have a base damage that is 2.5x higher than any other javelin, meaning their combo detonations will typically do more damage than those of any other class. Ranger also has access to all 4 types of primes, which makes it possible to infinitely combo any enemy.

This is one way to build a Combo Ranger, but it is certainly not the only way, and it might not necessarily be the best way. If I was to design what I considered the perfect Combo Ranger it would look similar to this one, but with high weapon damage on the Ralner’s Blaze, the backup weapon (stat stick) would be a shotgun with double armor rolls, allowing us to replace Elemental Ops with Acid Slugs. Arctic Tomb would have 300% charges, as would Recurring Vengeance. Vanguard’s Rampart would have double combo imp rolls, as would all of the components except Tip of the Spear, which already has 60% increase (which is as high as a double combo imp dmg inscription can roll). Acid Slugs would be preferable because it can roll with combo imp dmg, where Elemental Ops cannot. You would lose out on the double prime with Ralner’s, but you could still cycle infinite combos with fire and ice. The acid could be brought out every once in awhile when you needed it, and you would always have the extra combo imp dmg from having Acid Slugs. I’d also likely choose Emergency Power over Rejuvenating Ammo, since it’s a good last resort to survive option.

The toughest part about playing combo ranger is that you are going to get a lot of your primes detonated by another player. Interceptors running Blades of Warding will become the bane of your existence, because by the time you get something primed, they will be right there to detonate it, and at about 10% of the damage that you would have done. You will also notice that you clear things a lot slower than other people, because there is no real good AoE with a Ranger. You’re pretty much stuck going through enemies one by one.

But you’ll also be able to kill high HP enemies faster than anyone else because you have the easiest way to cycle through ice and fire primes. There are other viable ways to build a Combo Ranger. Instead of Ralner’s Blaze and Arctic Tomb, you could run an LMG, Focused Freeze, and Explosive Blaze. Since Focused Freeze is a universal component, you can get it with Combo Imp Dmg. This would give you a fire grenade to prime with, detonate, then use the LMG and Focused Freeze to ice prime, detonate, and re-prime with Explosive Blaze. Some people prefer this method because the fire prime will do damage, while Arctic Tomb’s ice prime does not. I like Arctic Tomb more because it holds enemies in place, and the prime and effect both spread to nearby enemies when it is detonated. Getting the 10 hit streak with the LMG is also not as easy as getting the 5 with Ralner’s.