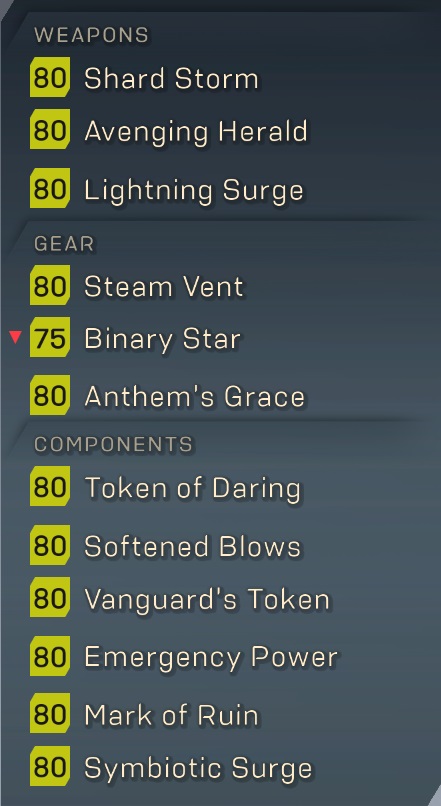 Fire Storm is one of the best builds in the game.  Nothing can clear a room as fast on a consistent basis, especially when enemies are spread out.  Trash mobs just incinerate in seconds, and larger enemies can be taken down as well.  The fire effect from Binary Star has a rating of 60, but it acts like 100.  Any enemy that is hit by Binary Star will be fire primed, unless it has an immunity to fire.  The whole point of the build is to get everything burning through Binary Star, and to get Binary’s fire DoT (damage over time) as high as you can without sacrificing survivability.  Since everything that affects the Binary DoT (jav damage and elemental damage) also affects Steam Vent, they work in harmony with each other.

This is my favorite javelin to play, and it’s the one my whole team used to top the leader boards during Cataclysm and Season of Skulls more weeks than not. People will look at Storm and see damage numbers around 20-30k or less and think that it doesn’t do a lot of damage,especially when compared to combos from Ranger or Colossus that can easily go over 500k. But most enemies don’t have that much HP, and Storm has better time to target acquisition than any other javelin thanks to the range on Binary Star and Steam Vent. So it’s perfect for clearing large groups that are spread out.

What it’s not perfect for is boss fights or Titans. Because the ultimate ability is so weak, you can’t do millions of points of damage immediately like you can with other javelins. And against things with a fire resistance, like an Ash Titan or the first phase of the Monitor, you’re going to be there for a long time unless you have high DPS teammates. But most of the game is focused around fighting enemies in situations where this Storm really shines.

The combination of Steam Vent and Binary Star is superior to any other gear combination. A good Steam Vent will strip all shields off from a flying enemy, and then Binary Star will set them on fire and knock them out of the air. And fire does 1.25x more damage to armor, which helps whittle down the Scar Enforcers and Dominion Brutes quicker. The main thing that is lacking from this build is a method to apply acid. I personally think these components are ideal for this build, but with Acid Slugs in place of Emergency Power and an equivalent shotgun in place of Shard Storm, you could get that. It would also be nice to shoehorn a Thermal Cooling in place of Emergency Power if you can get one with better rolls. Since the ultimate on Storm is so weak, it’s basically a DPS loss for this build, so the advantage of Emergency Power is less on Storm than any other class.