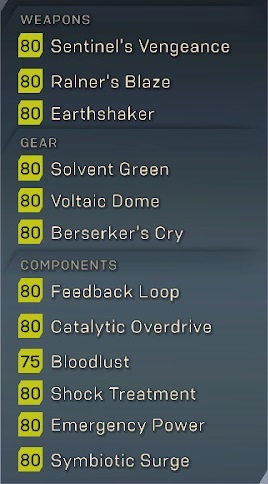 The Voltaic Dome build is the most up close and personal build for the Colossus. Relying heavily on combo coordination, and quick movement from enemy to enemy. This guide will serve to help a player set up their build in a way that is most efficient while also providing alternatives if wanted. This build benefits greatly from the mechanics outlined in our Advanced Colossus Mechanics guide.

This build, like the other three main Colossus combo builds, has its strengths and weaknesses. The build's largest strength is eliminating awkward situations and halts in damage output. Learning fast Colossus movement is essential to keeping this build functional and destructive. The player must think ahead on what they want to do before they do it or face stepping on their own toes. If fumbling stop and slow down. Boss damage is not too big an issue but by no means does it shred like an ulti- ranger or interceptor would. If desired adding some ultimate inscriptions may be the trade you want to make to increase your boss damage. Armor recommendation is around 180-240% from inscriptions. A “good” combo range is 200k on average for simple red bars and not many buffs up to 600K on gold bars with all buffs up. High damage would range from 350K simple red bars no buff to 800K gold bars all buffs.