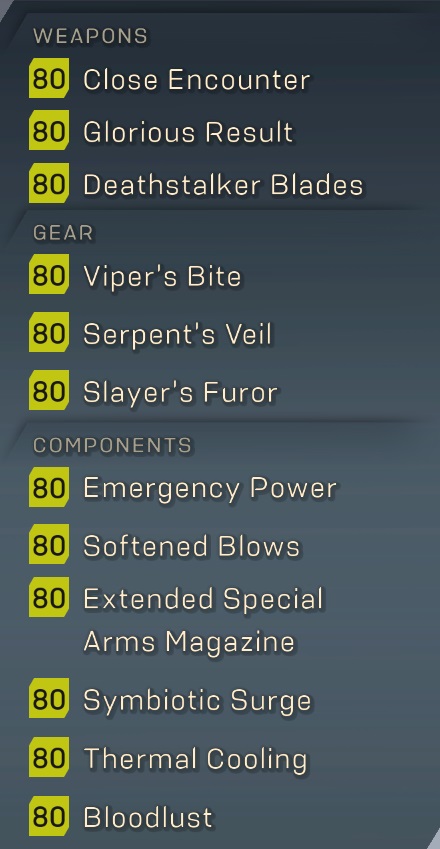 Meet Scuba Steve.  Scuba Steve likes to kill things, and he’s REALLY good at it. See, Scuba Steve is basically an ult interceptor. And no other javelin can do the amount of pure single target damage that the ult Interceptor can. But Scuba Steve also has a secret - he’s pretty good at melee, too.  See, because Steve can’t ALWAYS use his ult to kill things, he wanted to have a secondary source of damage so that he wouldn’t have to stop killing things. Some might say this makes Scuba Steve a sociopath. And they might not be wrong. But when you’re out in the wilds, and you encounter a Legendary Ancient Ash Titan, you want Scuba Steve’s sociopathic ass on your side.

This particular build is focused around maintaining a strong amount of melee damage, and then having an ult that can take down any target in your way. This is the build that I bring into Strongholds and Conjunctions when I don’t know if I’m going to have any other players that have high DPS, because I don’t need any other damage sources. Components are mainly selected for their ability to increase ult damage, although 2 components are switched from pure ult damage to a combination of melee and ult damage inscrriptions. Guns and gear are focused on increasing melee damage in between ults, while also generating ult charges through use of Viper’s Bite, so you can slice and dice your way through anything in your path.

This is one way to build an hybrid melee/ult Interceptor, but it is certainly not the only way. It’s also, in my opinion, the most effective build for Interceptor in general. The total melee damage with all buffs active totals out to 1007% without ever shooting Glorious Result, which could give you another 150% if you want to try juggling weapons to maximize your buffs. But since Close Encounter activates its buff when you dash, Serpent’s Veil activates its buff when you hit something with acid, Bloodlust activates when you kill something with melee and Symbiotic Surge activates when you pick up a health pack, you’re going to have those buffs active most of the time. And you will still be hitting stupid total damage and killing anything is your path with your ult. This is also as close to perfect as I can get this build with the components that I have. Every component serves a function, both in terms of inscriptions and base effect, although the benefit from Extended Special Arms Magazine is dubious at best, but I am running 2 heavy pistols, even if I won’t be shooting them much. Because we’re not using a shotgun, we don’t need Acid Slugs. Or any of the other gun related components. Rejuvenating Ammo could potentially be useful, but it might also be detrimental if my armor gets refilled via an ammo pickup and that keeps me from being able to pick up a health pack which would activate the damage boost from Symbiotic Surge. There is probably room to add a little more melee damage in exchange for some ult damage, but it’s probably not necessary. This build still has more than enough damage to kill anything short of Stronghold bosses.

The toughest part about playing Interceptor in general is that you are squishy as hell. Compared to every other javelin, you’re going to be like a wet paper bag. That means that you have to stay moving constantly in order to not die, even if you have a lot of armor (shield is basically crap). It makes learning how to play Interceptor one of the more challenging javelins. You also don’t have any good burst damage when you’re not in your ult, so you’re going to have to dodge around higher HP enemies as you attack them.

But the upside is that you’ll be able to basically kill all enemies with a single ult. Legendary Enforcer walking around? Hit him for 5 seconds with your ult then go on to something else, because he’s dead. 2 Legendary Enforcers hanging out with a Legendary Escari- none of them will be there by the time your ult is done.  And Interceptor ult damage is null, so it does not scale up or down against armor or shields- it does all of its damage regardless of the enemy type. You can even kill a Bristleback with a single ult once you have enough damage. I’ll typically run this build because I have enough melee damage that enemies die a little bit faster than in my pure ult build. This is important, because survival is easier when I can stay moving without having to leave little enemies alive after my initial attack. Basic and Elite non-armored enemies can be killed before the javelin comes to a complete stop, which helps me stay alove. This is the main build that I can confidently take into any situation where I might be solo, or I might have to carry low DPS players. Most other ult builds don’t really have that option, they either lack room clearing speed or boss killing speed. {BodyText}

I typically run this build with an Epic Acid Sigil and an Epic and a Rare Ultimate Sigil. The extra 10% from an Uncommon Ultimate Sigil is not worth losing out on the 30% acid damage, because the acid also increases your melee with Deathstalker Blades. With only acid and Slayer’s Furor debuffs and Symbiotic Surge, this build can hit 178k small hits and 356k big hits when I run 2 ult sigils. The 2 ult sigils are probably overkill for this build, but this whole build is centered around having so much DPS that you don’t need to worry about anything else. Could probably swap one out for a melee sigil or a gear sigil, but I’ve never really found a situation where I need to.