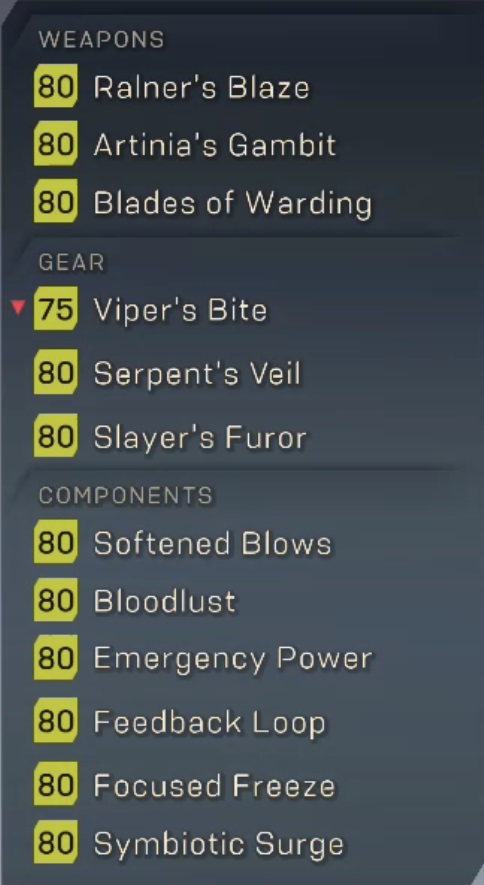 The interceptor ultimate is widely considered the strongest ultimate in the game. Stretching over a longer period than the others and having effect from the shadows afterwards the interceptors ultimate can take out bosses and high targets without breaking a sweat. This build is for one thing and one thing only. Having ultimate ready to go as soon as humanly possible. With the use of Serpent’s Veil AND .... Blades of Warding?!?! You'll be able to establish an ultimate at rapid pace. Put on combo sigils!!!!!!

Component of your choice

How to play the build

There are a few things to consider. Use vipers bite as often as possible, and combo as often as possible. Little guys will die quickly with just one combo, but applying two primes as often as possible increases the speed that your ult goes up. So whenever possible double detonate. Make sure that fire aura is up as often as you can when killing bigger targets. If you have some hybrid universal components with melee and ultimate slapping, those on is a great way to make Blades of Warding less bad. Always run two combo sigils to make the most out of your combo damage. Remember to be courteous to rangers and colossus players who are dropping fat combo numbers, and the biggest thing: Use your ult when you have it, unless saving for a boss. You really can use your ult as soon as you get it! With this build it takes so little to get it back up again so don't waste time. This is an ult build! Not a melee or combo damage build. My saying for this build: Get your ult all the time while making blades of warding useful and not hot garbage. So bust out those 400% blades of warding you have no idea what to do with, and shred some enemies with that truck of an ult.