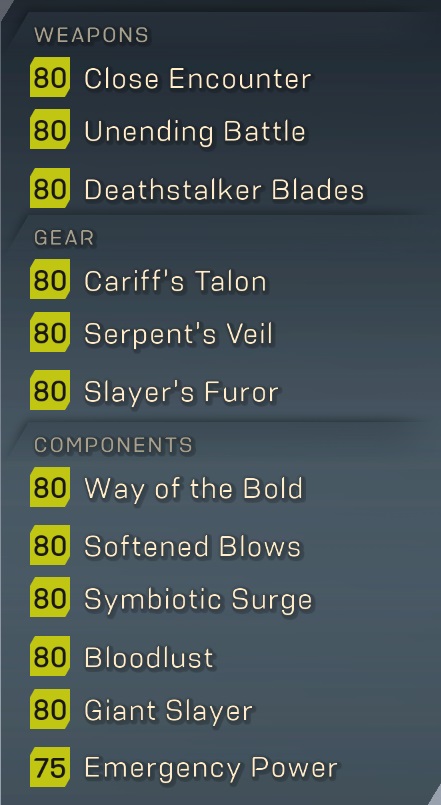 Meet Stabby McPoison. Stabby hasn’t had the easiest life so far. She was born in Fort Tarsis to a Freelancer mother who died on a mission when she was very young. Stabby’s father was Pirndel Blatch, but he was too busy taking care of the Fort to spend any time with the daughter that came from a one-night stand in which Stabby’s mother seduced him by talking about “cleaning some pipes”. So Stabby grew up with a big of a chip on her shoulder, and that only grew larger as she got older. From a childhood spent picking pockets, she developed quick hands and a deft touch. And from fending off lecherous drunks that would frequently stumble past on the nights she had to sleep on the streets, she learned to fight. Finally, she got a chance to be a freelancer, and she jumped in with both feet. The fearless nature that served her so well growing up manifests itself in how she fights outside the walls as well. No matter how big the enemy, or where they are, Stabby gets right in their face and just attacks.    Because she knows that in a contest of wills, she reigns supreme.

This particular build is focused around maintaining the most melee damage possible while constantly staying on the razor’s edge of dying. This is a build that will show you exactly how soft your javelin can be and still carve through enemies like a hot knife through butter.  Components are mainly selected for their ability to increase melee damage, although there is one component that is purely defensive in nature, because going pure glass cannon on an Interceptor seems like a net DPS loss when you factor in how much time you have to spend avoiding attacks from enemies, which is time that you aren’t doing damage. Guns are focused on increasing melee damage, while also providing a reasonable amount of armor, and one piece of gear is purely offensive, while the other fills a gap in both the offensive and defensive repertoire of this build.

Way of the Bold

This is my favorite way to build a melee Interceptor, but it is certainly not the only way. It’s also, in my opinion, the most basic, easily scalable build for Interceptor. The total melee damage is so high that you will slice through most enemies like they aren’t even there. Target acquisition becomes very important, since you want to be attacking as often as possible to limit the damage that you take. I could probably survive better with a double armor stat stick instead of Unending Battle, but it has the added bonus of giving you a “turbo boost” to your melee damage for those times you have to get through a big enemy.    Also, it really hurts to have to use Giant Slayer. Rejuvenating Ammo with the same rolls would be much better, since it would add a utility to the build outside of inscriptions. I’d even prefer Thermal Cooling.

The toughest part about playing Interceptor in general is that you are squishy as hell. Compared to every other javelin, you’re going to be like a wet paper bag. That means that you have to stay moving constantly in order to not die, even if you have a lot of armor (shield is basically crap). It makes learning how to play Interceptor one of the more challenging javelins. You also don’t have any good burst damage in this build, although the damage does stack up quickly, so you’re going to have to dodge around higher HP enemies as you attack them. And don’t be afraid to use your ult for the period of invulnerability to whittle down enemy’s health, which will make it easier to kill them when you are out of your ult and can do serious damage again. Titan’s, Swarm Tyrant and phase 2 & 3 of the Monitor are extremely difficult in this build.  Basically, use your ult when you can, and hope you have a solid team.

But the upside is that you’ll be able to basically kill anything short of a Legendary Enemy before it can kill you. If you don’t have big melee rolls on universal components, you should absolutely be using Vengeance Matrix. JRSVengeance says so, and not just because it’s named after me (which it isn’t, but sometimes we pretend). It will give you a 50% damage increase to your melee, and offers you a period of reduced damage when your armor gets low. Combined with Softened Blows, this will give you a period of immunity to physical damage if the procs happen to stack together. Other very good players actually prefer Vengeance Matrix over Way of the Bold, I just don’t like having to trust the timing. If it proc’d on shield break like Softened Blows, I would definitely run it, since it increases melee damage and Way of the Bold doesn’t. But since I’m a firm believer in Murphy’s Law, I go with Way of the Bold.

I typically run this build with an Epic Acid Sigil (because the Deathstalker Blades melee is acid, this sigil increases your melee damage), an Epic Melee Sigil and an Epic Ultimate Sigil. The extra 20% from a Rare Acid or Melee Sigil is not going to make a huge difference when you’re already running over 1000% melee damage. With only acid and Slayer’s Furor debuffs and Symbiotic Surge, this build can close to 100k small hits and almost 200k big hits against armored enemies, which works out to just under 80k/160k on red bars. This means that everything melts. The sigils that increase melee damage are probably not REALLY necessary for this build, but this whole build is centered around having so much melee DPS that you don’t need to worry about anything else. Could probably swap one out for a gear sigil to increase Cariff’s Talon recharge or a Armor sigil to help stay alive, but I found something that works for me, so I don’t mess with it..