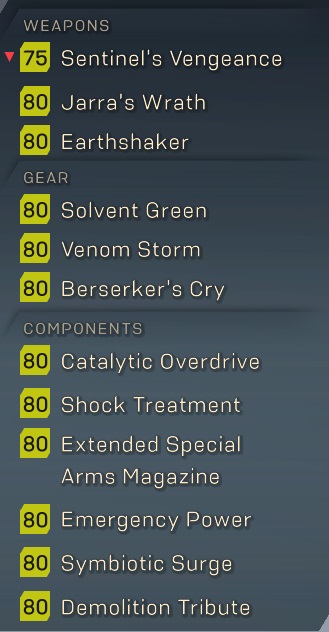 Colossus, the AoE combo king. This guide will serve as a great starting point for your Colossus as you enter the end game at level 30. We've selected some basic masterwork or legendary pieces that will allow you to be effective in Grandmaster 3 difficulty, without requiring any specific inscriptions. Set off ranged or melee combos with ease and terrifying frequency to clear entire rooms before your Ranger friend can finish off that turret over there.

These components are the ideal suggestions, but you should be fine if you don't have all 6. Without Demolition Tribute you may have trouble surviving, try stacking extra armor if you can (inscriptions on guns are the easiest way) and/or "repair drop rate" inscriptions. As a last resort, if you just can't survive, you can switch Solvent Green out for Best Defense, which will heal you every time it hits an enemy but will significantly lower your combo damage.

Save your ultimate for large targets which you cant take down with 2-3 combos, like Titans, Ursix, Escari or bosses. Make sure to use Berserker's Cry to yell at enemies often, as it increases damage for your squad as well as your own.