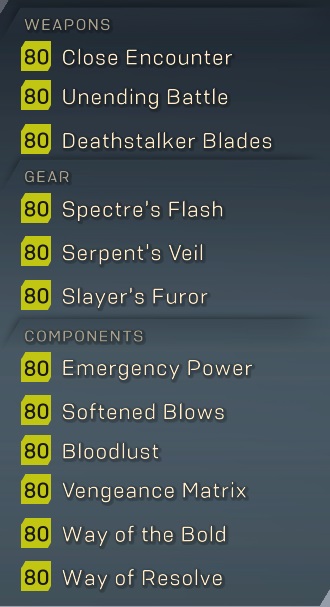 Melee is king here. Slice and dice your enemies with incredible speed. Dodge, dip, duck, dive and dodge around the battlefield leaving everything covered in acid and missing limbs. Stack as much Melee, weapon damage and all damage inscriptions as you can to boost your melee damage higher and higher

Way of the Bold

Interceptors have a lot of freedom in their builds. This is the ideal set up, if you have it all. None of the components are absolutely necessary, but if you are missing too many you may struggle to survive. Stack melee damage, weapon damage (javelin symbol not gear symbol) and all damage inscriptions in order to boost melee damage. Armor inscriptions will help, especially if you are missing some of the components, and ultimate damage can also help, if you cant get melee damage on that slot. Work on your speed, get comfortable with your triple dash, jumps and melee lock on to maximize your effectiveness.