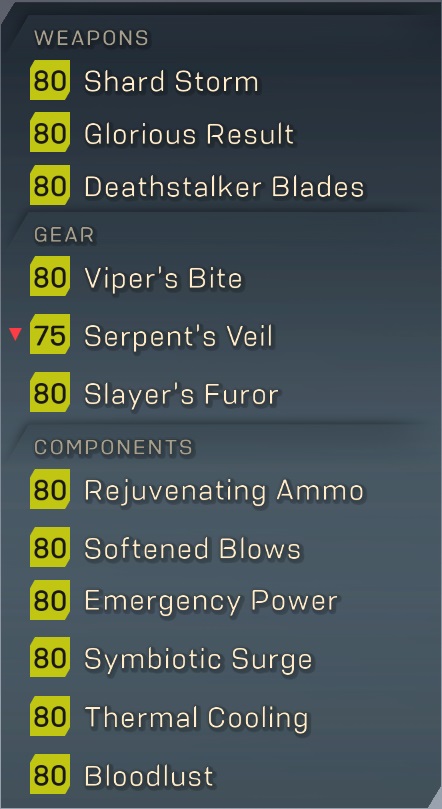 No other javelin can do the amount of pure single target damage that the ult Interceptor can. This particular build is highlighted around pushing max ult damage, while having a reasonable amount of melee damage for the times between ults, and also being able to support the rest of the team with acid debuffs and a support debuff. Components are selected for their ability to increase ult damage, guns and gear are focused on maintaining damage in between ults, while also generating ult charges through use of Viper’s Bite, so you can launch slice and dice your way through anything in your path.

This is one way to build an ultimate Interceptor, but it is certainly not the only way. It’s also not necessarily the most effective build for Interceptor in general, but it is certainly close. A hybrid option that had more melee damage in exchange for trading off some of the ult damage would be more effective at clearing things faster. But this isn’t that build. This is for hitting stupid total damage and killing anything is your path with your ult. This is also as close to perfect as I can get this build with the components that I have. Every component serves a function, both in terms of inscriptions and base effect. Because we’re not using a shotgun, we don’t need Acid Slugs. Or any of the other gun related components. Rejuvenating Ammo would be more useful if I had a Close Encounter being my armor stat stick instead of the Glorious Result. With this build, you keep Shard Storm equipped in case you need to use it. If I had a double armor Close Encounter I would keep that equipped for the MW perk to increase melee damage, as well as the damage of my Shard Storm. I’d also like a double ult roll on Symbiotic Surge, or one other double ult component to replace Rejuvenating Ammo, but they are very rare. The ult on this build can do over 20 million damage, and if you have someone else keeping up an acid debuff and Slayer’s Furor/Berserker’s Cry it can push over 30 million when you factor in the shadow that is left after your ult is over. This is more than enough damage to kill anything short of Stronghold bosses.

The toughest part about playing Interceptor in general is that you are squishy as hell. Compared to every other javelin, you’re going to be like a wet paper bag. That means that you have to stay moving constantly in order to not die, even if you have a lot of armor (shield is basically crap).It makes learning how to play Interceptor one of the more challenging javelins. You also don’t have any good burst damage when you’re not in your ult, so you’re going to have to dodge around higher HP enemies as you attack them.

But the upside is that you’ll be able to basically kill all enemies with a single ult. Legendary Enforcer walking around? Hit him for 5 seconds with your ult then go on to something else, because he’s dead. 2 Legendary Enforcers hanging out with a Legendary Escari- none of them will be there by the time your ult is done. And Interceptor ult damage is null, so it does not scale up or down against armor or shields- it does all of its damage regardless of the enemy type. You can even kill a Bristleback with a single ult once you have enough damage. I’ll typically run a variation on this build that sacrifices a small amount of ult damage on my Symbiotic Surge to get additional melee damage, and swap out the Shard Storm for a Close Encounter, so that I have more melee damage while still retaining enough ult damage to get through anything. It’s a build that I can confidently take into any situation where I might be solo, or I might have to carry low DPS players. Most other ult builds don’t really have that option, they either lack room clearing speed or boss killing speed.

I typically run this build with an Epic Acid Sigil and an Epic and a Rare Ultimate Sigil. The extra 10% from an Uncommon Ultimate Sigil is not worth losing out on the 30% acid damage. Unless I’m chasing the highest number I can hit, which is not an uncommon occurrence. With only acid and Slayer’s Furor debuffs and Symbiotic Surge, this build can hit 189k small hits and 379k big hits when I run 3 ult sigils. The 2 ult sigils are probably overkill for this build, but this whole build is overkill.