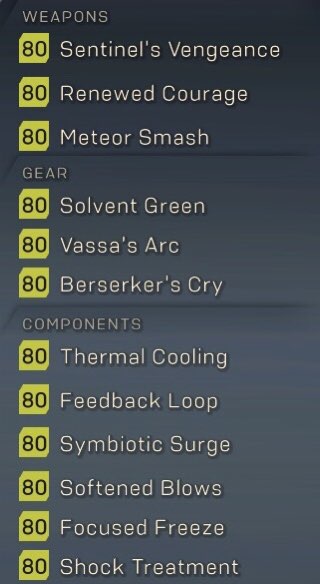 Vassa’s Colossus is my favorite build in Anthem. It is the mirrored image of the Voltaic Build. I highly suggest reading Soggy028’s guide on said build as well, being the person who taught me Colossus movement and tech theory, his insights are certainly worth a look.

Regardless both builds sit among the very highest DPS potential in the game. They are perhaps one of, or even the only example of two builds actually having identical damage output in this game. However, the way in which they deal that damage is quite different. Before we get into that though, here’s the rundown.

Here we just want to stack as much %Combo Blast Dmg as possible. You’re free to strike your own balance of %Combo Blast Dmg to %Ult Dmg, but having optimized Colossus Ult builds before, I would recommend leaning heavily toward Combo if you are looking for DPS, only putting Ult rolls where it would not take away Combo rolls.

Since Symbiotic Surge and Focused Freeze are absolutely critical universals to this build, you should keep them regardless of their rolls until you get better ones in my opinion.

This build is a beast. It really has everything. The main things it challenges the player with are:

Tips: as with any medium to close range Colossus build, movement is a challenge, but not one that can’t be overcome. A well piloted Colossus is hardly any slower around the battle field as any other Javelin, and really should only be feeling its speed deficit in between rooms or during a long stretch. Some good practices would be:

• Jump and immediately fly at a low altitude to the next enemy after a kill.

Tips: the only time you should let Vassa’s run is when you’ve decided to begin a juggle. Otherwise on things that will die in one combo, your loop will be: Melee>turn Vassa’s on>wait for the spark and detonation>turn it off.

This way you really shouldn’t ever be running out of charges even if you don’t have any extra charges. Those rolls are really just to help you have some left after you perform a long juggle.

Tips: when it’s time to take down an enemy with a large health pool, this build lives and dies by its combo loops. You will either fumble around with all its options, or let it really open up what it can do. It all depends on how well practiced you are with your loops.

The most optimal that I have found is:

On your flight to an enemy activate melee and Vassa’s simultaneously (Yes, Vassa’s will receive inputs while other moves are input. It’s weird.) If you were flying low as I mentioned, the melee will prime right as Vassa’s sparks, detonating your fire prime instantly>support cry (this will cancel your Vassa’s so turn it back on as the cry is finishing)>fire Sentinels Vengeance>switch guns>fire LMG non-stop until its dead.

If you did all that correctly, you will have landed with a fire detonate, weakened them, detonated your strongest combo (acid), and then Vassa’s detonated constantly as the enemy’s prime status was continually flipped between ice and fire due to the LMG and the puddle of fire they were standing in.

With a little practice, these challenges will melt away in huge explosions and whatever weird sound Colossus yells out. Have fun! 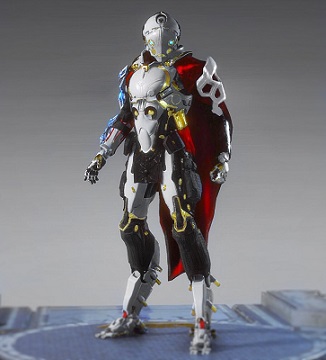