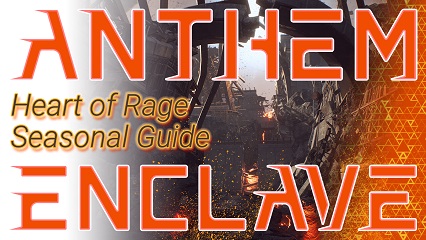 Welcome to the Anthem Enclave seasonal Heart of Rage walkthrough. This guide will teach you everything you need to know in order to get the highest score possible and earn the most crystals per run. Each section is accompanied by screenshots (click to see full resolution) showing the approximate locations of every collectable you need to find.

Everything you do in the "seasonal" strongholds will earn you points, points are multiplied by your current multiplier and your multiplier is increased by collecting golden orbs, killing mini bosses spawned by completing puzzles and successfully completing events in each major room (there will be an event timer displayed, fail to complete it with in the timer and you will not get the multiplier AND you will lose one as well).

Time is also very important. Each event will award you a large chunk of points, these points are based on the time remaining on the event timer which is then multiplied by your current multiplier. The faster you move through the stronghold, the more points you will finish with! 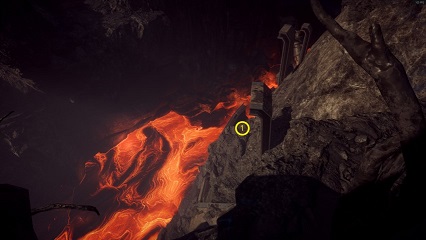 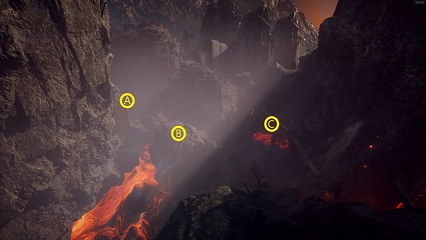 A lot of open space to hide things in the lava canyon that you run into immediately after leaving the spawn. In here there will be two Golden Multiplier Orb (one has a permanent spawn, the other has 3 possible locations.), a Note Chain, three Red Crates and the Stronghold Puzzle. Whew.

Let's find the multipliers first. As soon as you fly into the canyon, drop straight down, the first Golden Orb will be right below you, 100% of the time. From there, look left down the canyon to find the second Golden Orb. The spawn marked "A" on the second screen shot above is hovering just beside a structure built into the rock wall. "B" is behind the large rock shown there, on the ground trying to hide. "C" is sitting in the air between the metal beams, pretty easy to see.

The three Red Crates can spawn anywhere between Golden Orb "B", and the end of the Note Chain. Each crate is worth some points when broken open, but not a ton so don't waste too long looking. The Note Chain starts at a lava stream on the right side before you get to the Golden Orb spawns, and runs up towards Room 1. The first note in the chain is blue, the rest will be green, but when you pick up the blue note, the next will change to blue. If you pick them up in the right order, each note will turn blue until the final one, which will turn purple. Each tier of colour is worth significantly more points (green<blue<purple<yellow).

The Stronghold Puzzle is to the left of the "C" Golden orb, beside a small lava pool. It's a very simple memory game. Flip two tiles, if they match they stay flipped, if not you need to remember their locations and find the matching tiles. Once you have the whole board flipped, the Shaper Sphere will lift up and drop a pile of yellow notes which are worth 20,000 points (these are the only points in the entire stronghold that are NOT effected by your multipier level) 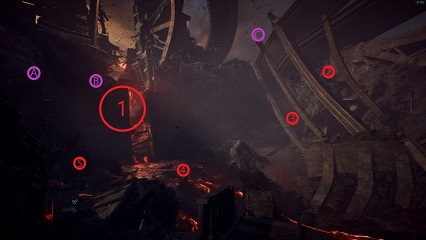 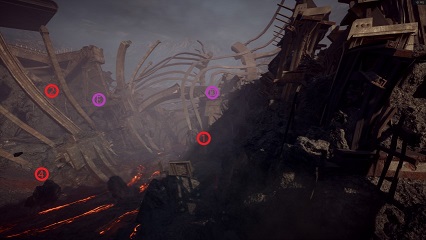 Room 1 has the first Grabbit Statue and a secret mini boss to spawn. If you've done any of the other Seasonal Strongholds, you should be pretty familiar with this method of spawning the boss.

5 Red Orbs around the room to collect, which will then spawn a mini boss which gives a mulitplier and some points. it is ideal to spawn and kill the boss quickly, without killing anything else in the room, to ensure maximum points on all the kills, but that will require a VERY strong javelin and some skill.

The first orb is pretty much directly on top of the location where the first screenshot was taken, immediately to the left as you enter the room. Number 2 is sitting between two metal arms on the right side and 3 is just a little further and more right in a small nook. 4 is dead center in the room, on top of a small rock (and surrounded by valkyries and brutes... good luck) and the final, 5, is behind the turret in the back of the room. Kill the boss and then clear the room ASAP.
‍
Don't forget about the Grabbit Statue in all the chaos and violence (I usually do). Five possible locations but none too hidden. "A" is on a small ledge beside the exit towards the Titan room and "B" is just to the right of that at the top of the wall against the back of the room. "C" is perched waaaay up on top of one of the metal arms. "D" and "E" are on either side of the entrance to the room, E is on some rocks and D is on top of a small wall/structure. 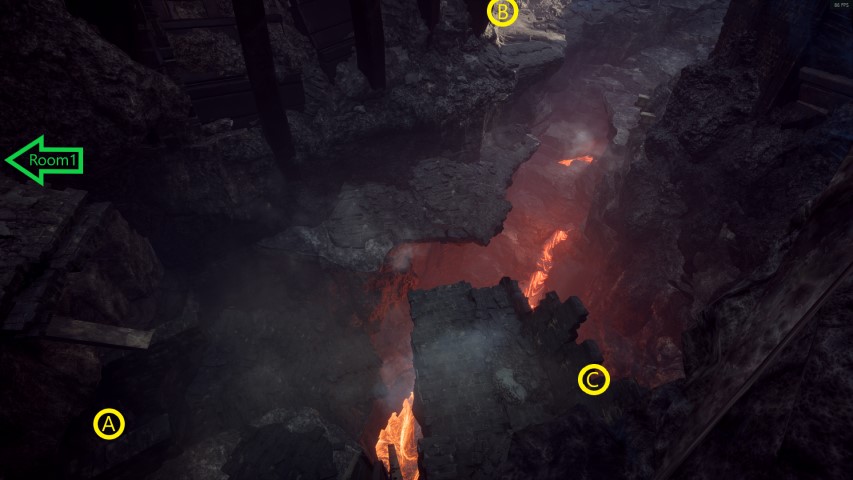 Through this hallway to the Titan room, you will find one Golden Orb, a Note Chain and three Red Crates.

The first Golden Orb spawn shown at "A" is directly under you as you fly in, though this one is pretty rare. "B" is along the left, tucked around a corner and easy to miss and "C" is behind that small wall on the broken floor/bridge(?). B and C are far more likely to spawn.

The note Chain starts between "A" and "C" and continues through the hall and ends outside the Titan room.

Three Red Crates will spawn between here and the Titan room, one is often on the left side ledge just past the "B" spawn for the Golden Orb. The rest will be in the next section of hallway, just before the Titan. 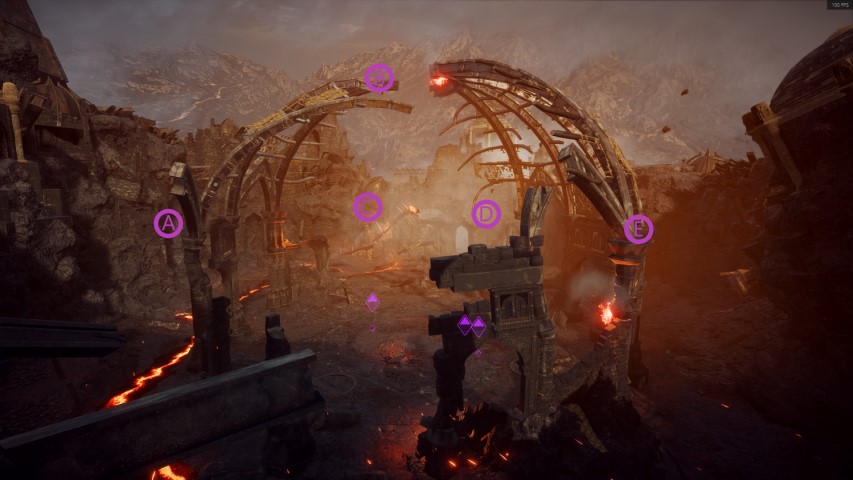 One Grabbit Statue here, a mini boss to spawn for a multiplier, and the Titan to kill for another multiplier. The screenshot here is taken from the back of the room, looking towards the entrance.
‍
Around the outside of the ring there are pyramid shaped weights/relics and around the Titan there are 6 pressure plates. Drop a weight on each plate to spawn the mini boss (a player standing on a plate also works, so you do not need to grab a 6th weight and if you have a coordinated team you can do it very quick with 2 or 3 weights only). Kill the mini boss first, and then the Titan.
‍
Find the Grabbit Statue before leaving. "A" is on a small structure built into the wall. "B" is all the way at the top of the broken dome the Titan is inside, on top of one of the beams. "C" and "D" are along the wall near the entrance and "E" is on top of a wall that makes up the broken dome 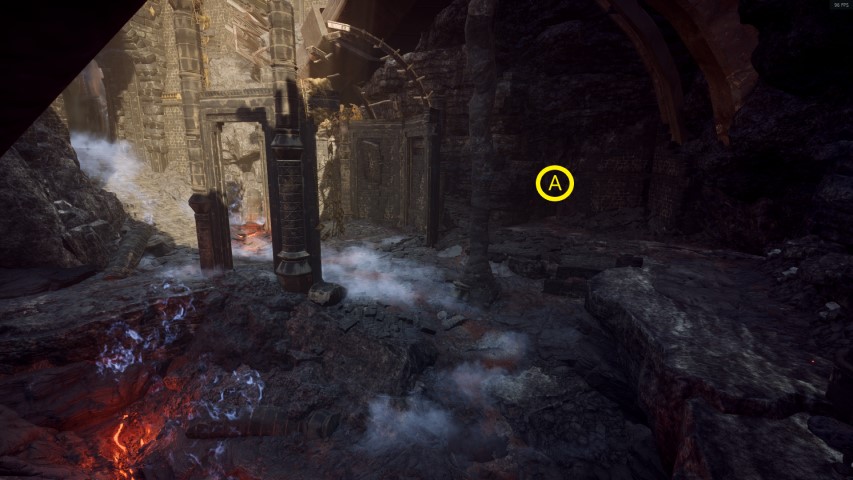 Super easy room. There is a Note Chain in the hallway that leads from the Titan room into this one, and also there will be three Red Crates along that hallway or in this room so keep an eye out.

As soon as you come into the room, look to the right and 99% chance you will see a Golden Orb. There is an extremely rare chance of a second spawn, which is on the opposite side of the room, but its SO rare there isn't even a point in marking it (I've seen it once in probably 100+ runs).

After that you just need to clear the room and move on. The next room with the grounder circle has no secrets, just sit and wait for the bar to fill so you can get to the last event. 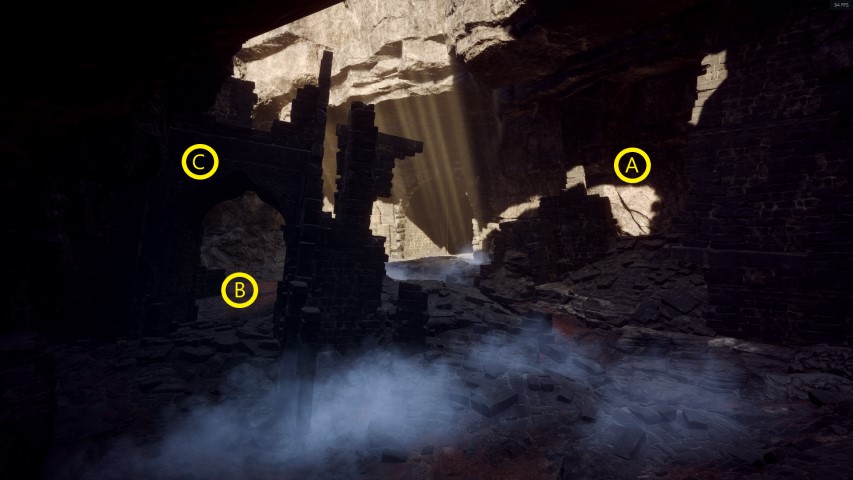 Quick room again before a much harder one. Just a single Golden Orb and a Note Chain.

Check to the right in a small nook for "A". You should have already seen if "B" was there, as it's sitting open inside the archway. If neither of those two (almost always is A or B) check the final spot at "C", on the back side of the broken wall where "B" is. 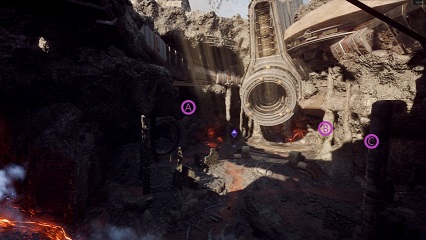 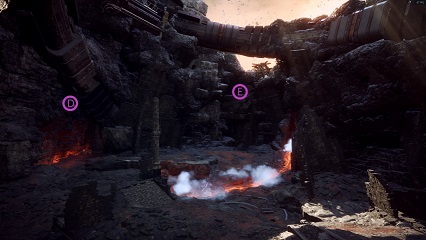 After a stretch of easy, relaxing rooms, one of the hardest. The third Grabbit Statue is found here, and another mini boss to spawn for a multiplier.

Around the room there are 5 Echo Receptacles, and some of them have Large Rocks grown over them. Gather echoes and place them in the receptacles, which will require finding Bombs around the room to destroy the Rocks that will be blocking some. Ideally this is another situation where you want to attempt to not kill anything until you get the mini boss multiplier, but again, its extremely hard. There are a lot of valkyries and brutes in this room.

After the mini boss is dead, remove all the echoes and gather up the others to finish the event by dropping them on the pad. This spawns 2 Furies which will end the event once killed.

The Grabbit Statue here can be tricky, many spots are well hidden. "A" is above and to the right of the exit, sitting on the rock wall. "B" is hiding behind the rock pillar to the right of the echo pad. "C" is also well hidden, inside of a broken structure of some kind sitting against the wall. Again, "D" is hiding, in a small corner between the large metal ring and the wall it is coming out of. "E" is easy, just sitting on a high up ledge in the back of the room, though the bright sky behind it can obscure your vision. 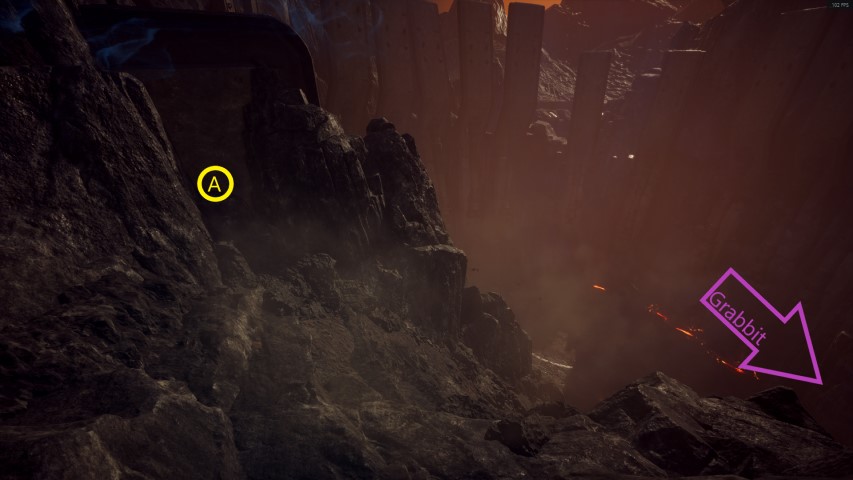 On the slope down to the monitor, there is another Golden orb, and one Red Crate. Just look left as you come down the hill, you will see the Golden Orb (static spawn) and the Red Crate will be just across from it on the same level.

DO NOT FLY TO THE MONITOR.

Instead of turning left for the monitor, go right, behind the Cenotaph, to find the final Grabbit Statue and the Golden Grabbit. If you killed all three statues before this, you will spawn the Golden Grabbit right here, which is worth a LOT of points and another multiplier. The Grabbit is highest value single item in the Stronghold, and if you do miss a statue you CAN go back, but only if your team does not start the monitor fight. It is absolutely worth going back for, as it's worth somewhere over 1 million points (1000 crystals) on Grandmaster 3.

In every other Seasonal Stronghold, this would be the end of the guide... but not in Heart of Rage. 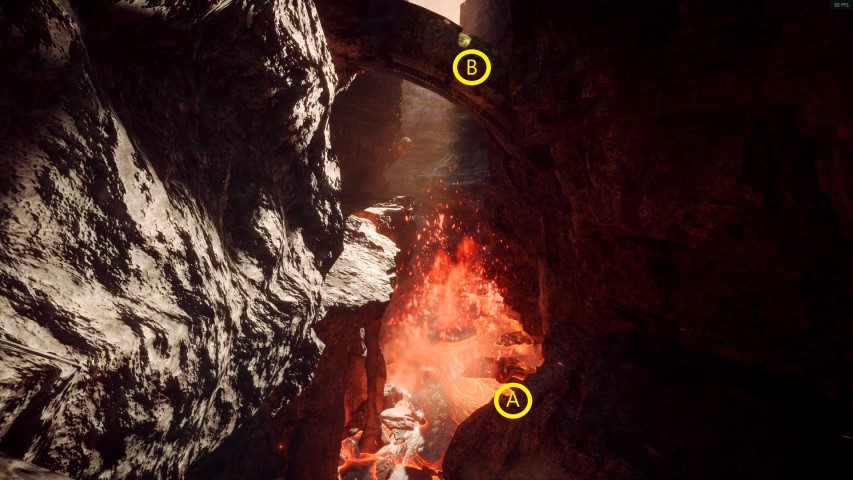 Between the two rooms that you fight the Monitor in, there are secrets. Along the Lava canyon hallway, there is a final Golden Orb and a very tricky Note Chain.

Shortly after entering the canyon there will be an archway or bridge cutting across the top. Behind this, on the right side, is the "B" spawn for the Golden Orb while the "A" spawn is directly below that, hovering dangerously close to the lava (I overheat a lot going for that one).

The Note Chain runs the full length of the canyon, BUT it's backwards. The start is at the far end, so be careful to avoid the notes and get them on the way back to phase 3, after you finish the acid room.

That's it! You're done and are about to get a nice stack of crystals. A good, fast run on Grandmaster 3 with everything done right is about 12.3 million points here, so that should be your goal.

Enjoy your crystals, where ever you choose to spend them.